A tweet from Canadian Politician representing the New Democratic Party in the Heron-Bruce constituency and Bluewater Bay School Board Trustee, Jan Johnstone 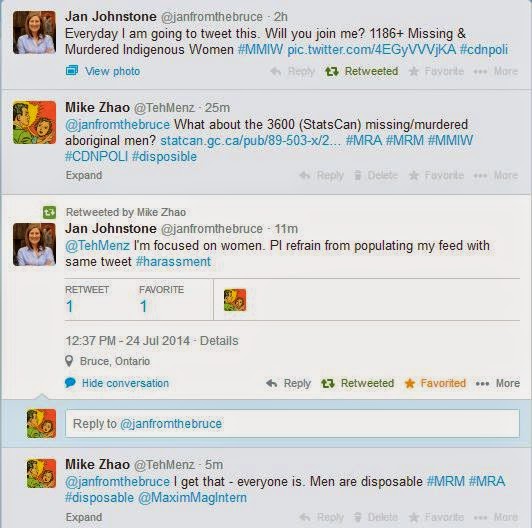 Jan Johnstone of Ontario's NDP implicates, rather explicitly, that she doesn't care about men. Ms.Jan Johnstone dismissed, out of hand, the lost lives of 3600 Native Canadian men. Before you vote on the people we send to Queen's Park, and on the people you want directing the education of your children, please consider Jan Johnstone's reply and ask yourself whether you believe Jan Johnstone cares equally about every life, regardless of the sex of the person living it.

The following image is a screen-grab of a conversation with a Twitter user who uses the handle Id Johnson. If you look closely at her user-image you'll see it has a number of venus-symbols stuck in the ground like gravestones and bears the caption 'Stop Violence against Women and Girls'. Evidently, like Jan Johnstone of Ontario's NDP, Id Johnson doesn't care about the well-being of men either: 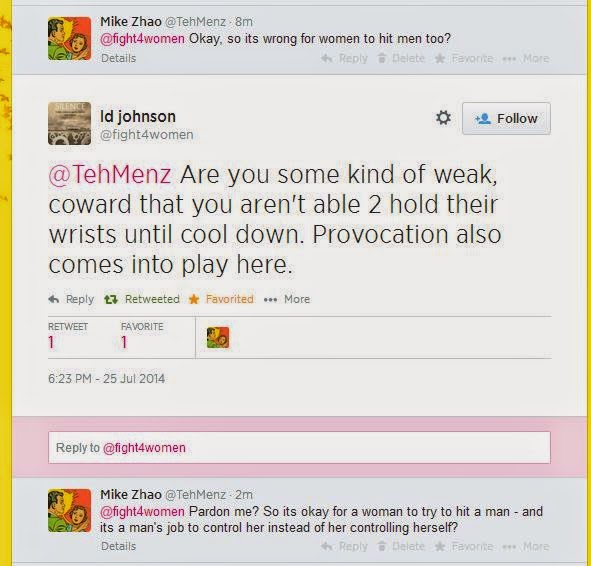 Passing from Virginity. An Open Letter to Charly Lester of the Huffington Post.

Thank you for helping to break the silence surrounding male rape.

I was raped by my first sexual partner when I was 17. I had snuck into her parents house with her late one night. We filled about an hour with the sort of pseudo-sex that precedes non-virginhood before she asked me to have sex with her. I refused: partially for fear of waking her parents, and partially for my desire for my first instance of 'real sex' to happen in a safer environment. She protested, I refused again, and she answered by threatening to wake her parents, who I had felt scared around fully dressed, to say nothing of how I would have felt had they come to investigate and found me struggling to don my underwear. She won. She assured me that I didn't have anything to worry about, and that she'd do the work - as though that would help me relax. Ultimately, she mounted me and I passed from virginhood.

I judged it worth writing you about this event, as a major part of breaking the silence surrounding male rape involves engendering the acceptance, but not the tolerance, of instances of the heterosexual-rape of boys. I hope you will someday write an article that promotes awareness of such events.

Thank you for helping to obliterate this taboo.

How to Present Men's Issues. Part II: Using feminist premises to derive the importance of MIA


In Part 1 I wrote about acknowledging some of the achievements of feminists, and the important work some of its constituents still undertake. The goal of one of those undertakings is to ensure that women constitute a proportionate number of our law makers, thereby ensuring legislation benefits women as much as it benefits men.

Essentially, that belief entails the belief that the members of each sex should advocate for the members of their sex: women understand women best, and men understand men best, so let women ensure that the law fulfills women's needs and let men ensure that the law fulfills men's needs. Hence, given the common presumption that the feminist movement inherently comprises mostly women, the MIA can argue for the importance of a non-feminist movement that advocates for men's well-being thus:

MIA: So the legislature ought to comprise an equal number of males and females in order that it might enact laws that maximally benefit both sexes?

After that, the feminist has a limited number of rejoinders, which I will list below with their corresponding replies.

MIA: Interesting. And it works for the equality of both sexes?

MIA: So feminism would want to resolve men's issue xyz?

*Suppose FEM replies, No it mostly undertakes to improve women's status. The MIA may rebutt, I suppose that comports with what you had said about the legislature - women can resolve women's concerns better than men can, and vice versa. That's a reason for MIA.

** Suppose FEM replies, No. The MIA may ask, Do you think it's okay that xyz happens to men?Regardless of her answer to that question, the MIA may answer, That's a reason for MIA.


Alternatively, the feminist may decided to argue that men's issue xyz affects women more than it affects men. In Part III, I'll describe how to rebut such arguments.
Posted by Unknown at 13:21 No comments:

How to Present Men's Issues. Part I: Give credit where credit is due.

There is an especially active feminist cohort at my university; consequently, I've had, and have made use of, a number of opportunities to discuss the advocacy of men's issues with the people most likely to oppose it. In so doing I've learned a number of useful techniques for effectually presenting the subject. The next five entries will describe those techniques.

I noticed two things about my first debate with a feminist about the merits of men's issues advocacy:
Essentially, our conversation was a winner-take-all zero-sum game. I had never seen anyone concede the truth of anything when doing so involved publicly admitting absolute defeat, so I shouldn't have expected one of us to succeed.

Perhaps more interestingly, most of the feminists with whom I've discussed men's issues advocacy have asked me why I wanted to destroy feminism. I wondered why they suspected that I wanted that. I had never wanted that, so the question surprised me. In any case, it seems that many feminists fear that the advocacy of men's issues will harm their sub-culture.

I've succeeded in allaying the aforementioned concerns by expressing my appreciation of the historical accomplishments of feminism, such as
and by acknowledging the importance of contemporary feminist undertakings, such as
Moreover, acknowledgement of the importance of these undertakings produces a set of premises that both parties accept; without such a set of premises, agreement is a logical impossibility.

In Part II, I will describe how these premises imply the importance of men's issues advocacy.
Posted by Unknown at 17:46 1 comment:

Dear Editor,
Recent issues of The Citizen suggest a paucity of popular concern for the well-being of men:
In May, The Citizen published stories about the number of missing or murdered aboriginal women[1]; none of those stories reported that the lives of native men end by homicide three times more often than the lives of native women do. [2]
More recently, The Citizen published a story subtitled "The pimps they're the problem, the women we are the tragedy" [3]. Tragedy may characterize the lives of many sex-workers. However, not only women live such lives. Abuse, and debasement must affect many male sex-workers. The article also suggests that we ought to attribute the prostitutes' crimes to her circumstances and unconditionally exculpate her. Yet, we wouldn't, and don't, do that for crimes predominantly perpetrated by men trapped in comparably desperate circumstances.
Finally, yesterday, The Citizen published an article titled "Free buses deliver children to moms in prison" [4] and an article titled "Ex-teacher shouldn't see jail for sexually exploiting student"[5]; the latter reported an argument in favour of the convicted escaping a prison sentence so that she could live with her children. In contrast, only two months ago, the Citizen reported that while Chris Haore, accused of assault, awaits his trial, he might have only "supervised access to his five children...if it happens at all."  [6] These three articles suggest to me that we generally regard maternal relationships as more valuable than paternal relationships. Yet, I think most people would agree that fathers love their children as much as mothers do.